Trying to get pregnant can be stressful enough. Wondering if you’re passing on a genetic disorder to your child is even worse.  Boston IVF focuses on reproduction, helping families who suffer recurrent pregnancy loss and infertility. (About one in eight couples have a hard time conceiving.)  But they have a lesser-known niche, too: They also focus on pregnancy screening—something especially important for Ashkenazi Jews, who are more prone to illnesses such as Tay-Sachs disease and cystic fibrosis.

I talked to Dr. Michael Alper, a clinical professor at Harvard Medical School and a reproductive endocrinologist at Boston IVF, about everything hopeful Jewish parents should know before getting pregnant.

Many common genetic diseases are transmitted from both parents.

For a child to get a disease such as Tay-Sachs, both parents have to be carriers.

“We each have two genes for most conditions. You get one gene from your father and one gene from your mother, and we have pairs of genes throughout our genetic code, and there’s about 30,000 genes in our DNA. And these genes are important, giving instructions to cells in our body on how to function. With autosomal recessive conditions, if you have a good gene, you’re fine. But if you have two of the bad genes, then you have the disease,” Alper explains.

Take a genetic disease such as cystic fibrosis: Both parents might be healthy, but they could also be carriers with one “good” gene and one “bad” one. This means that each parent could pass on a bad gene to their child.

“Many genetic disorders are autosomal recessive. And, it turns out, you may not have a family history of these diseases. Because the way the genetics work, if both parents are carriers, the child has a one-in-four chance of having two bad genes and having the disease,” he explains.

Technology has made genetic detection much easier over the past 10 years; Boston IVF tests for around 300 genetic disorders for roughly $300, he says.

It’s normal to test positive as a carrier for something. Really!

“About 70% of individuals who are screened with this large panel of tests are positive for something. So, it’s normal to carry a bad gene,” says Alper. “Unfortunately, there’s a lot of misunderstanding about these genetic diseases.”

Many people believe that as a carrier, they also have the disease—which isn’t true.

“It’s only a risk factor in terms of your child if your partner is also positive,” he says.

If both you and your partner test positive for a genetic disease before getting pregnant, there are options.

Couples can undergo in-vitro fertilization, wherein a woman’s eggs are fertilized outside the womb, embryos are created and then tested. Only genetically healthy embryos would be implanted.

“We remove a few cells from the embryo and send them for diagnostic testing using a genetic probe to see if the embryo, which will obviously be the baby, has the disease. We can identify the embryo or embryos that will result in a kid with the disease and not transfer it,” Alper explains.

The official name for this is PGT-M. It takes about three weeks or so. And—good news!—it’s available to anyone, even couples who haven’t had difficulty getting pregnant.

It’s important to plan ahead to save yourself stress later.

“Here’s the important message: I would recommend to anybody that they should go through screening. Because if the screening shows that you [and your partner] don’t carry a disorder in common, you’re fine, you’re at low risk,” he says.

But, if you get pregnant and then decide to screen, it’s far more stressful; some couples opt for termination or amniocentesis, where amniotic fluid is taken from the uterus for further testing.

“I think it’s very important for couples to consider, given these tests are so inexpensive. It’s just a blood test, or even a cheek swab. We could really prevent a lot of anguish and suffering that couples would otherwise be put through. The tests have gotten so inexpensive and so expansive that, no matter what their ethnic background is, I would recommend the expanded screen,” he says.

Plus, most insurance companies cover genetic screening, he says.

Genetic counseling can help prevent breast and ovarian cancer, too.

It’s possible to test for the BRCA gene, for example, which increases risk of breast and ovarian cancer. It’s especially common in the Ashkenazi Jewish population. The IVF process could spare a child the same mutation. Nervous patients can also inquire about non-disclosure, if they don’t want to find out their own genetic status—which can be a big burden to bear, should you find out that you’re susceptible to a lethal illness. Instead, a prospective parent could simply be told whether embryos were viable or not, without further details.

Yep, this is more foolproof than all of those popular online companies.

“It’s a question of reliability of the tests. I’m talking about medical-grade versus direct-to-consumer-grade testing. You’re just assured that they’re accurate,” Alper says. But, yes, it’s a bit of a pain: Right now you need a doctor to order your tests. Over time, he thinks that people will be able to call a company for a kit, do a self-swab, mail it off to a lab and get genetic counseling over the phone.

But, until then, “I would encourage anybody who’s trying to have a family to seriously consider genetic testing,” Alper says. 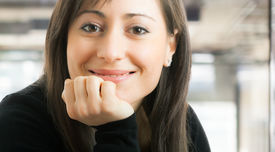 There's a pretty big range of normal when it comes to period length.